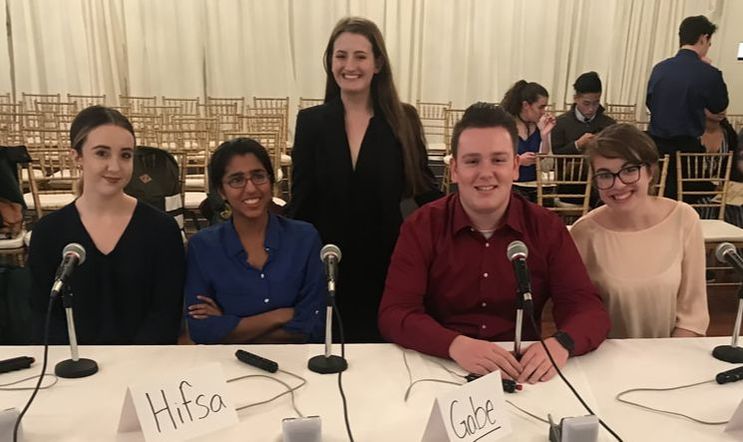 Seniors Amy Oliver, Hifsa Chaudry, Gabe Samolchuk, and Catherine Sopko represented Nottingham and placed 2nd overall in the 2018 Consumer Bowl.
Nottingham High School’s Consumer Bowl team had a very lucrative competition. After spending countless after school practices studying, the team was more prepared than ever before. This quiz bowl is jeopardy style in nature and involves three rounds of questioning. The first round is individualized with every member from each school being asked either a multiple choice or open-ended question based on consumer affairs issues which they must respond to in under 10 seconds. Next is the team questions with each school being asked a question which they must confer on before giving their response (again in under 10 seconds). Bringing up the rear of this competition is the lightning round, wherein any competing student from any school may answer the question, depending on who buzzes in first. For this portion, only five seconds is allotted for students to offer a response. These questions cover a wide variety of topics, from the lemon law to pet store buying practices.

​After years of placing well in the first round but never pushing past this initial round, the consumer bowl team placed first in their competitive event and were able to advance to the final round of the Mercer County competition. Functioning under the guidance of Ms. Margaret McWilliam, Nottingham’s competitive team was comprised of Amy Oliver, Hifsa Chaudry, Gabriel Samolchuk, Cat Sopko, and Jenn Shulz, who, collectively, were able to beat out Steinert, Lawrence, and Ewing in their event. Leading in scoring points was senior Hifsa Chaudry, buzzing in correctly to a plethora of lightning round questions. After the first round of overall competition, the team faced off with Hightstown High School in the final round. The reigning state champions in Consumer Bowl competition, Hightstown, beat out Nottingham in the finals to advance to the state competition. Placing second overall, Nottingham had an outstanding performance in this year’s quiz bowl.