by Lewis Cassidy and Charrilyn Martinez 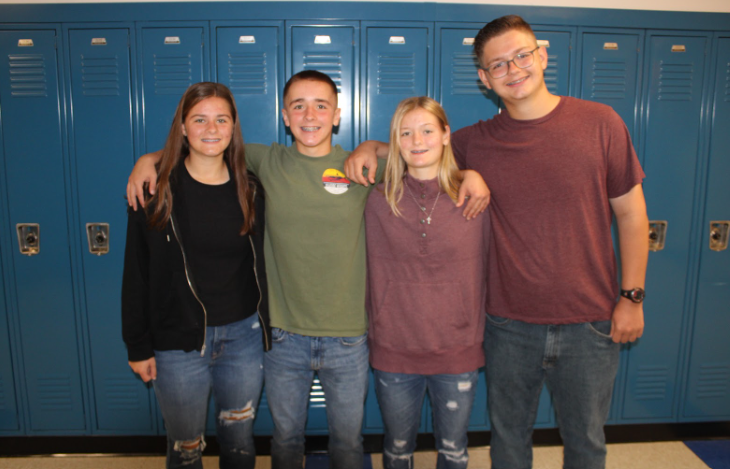 The Wilke Family Quadrupalets - (l to r) Emma, Matthew, Kaitlin, and Austin
​
​Tired of your baby brother using your toothbrush? Sick of your older sister bossing you around? How would you like to have three other siblings your own age? The Wilke quadruplets experience this three times over. They have three siblings their own age AND an older brother Nicholas who is 20 years old.

Austin, Emma, Kaitlyn, and Matthew Wilke are sophomores here at Nottingham High School. You might have seen them around school, but unless you saw them all in one place, you probably didn’t put the pieces together. Even then you might not have. That’s because they’re fraternal quadruplets, meaning that they all look different from one another. Quadruplets in general are a really rare thing. The chances of it happening are one in seven hundred thousand. Even though they share a birthday, they’re all quite different from one another. Now’s your chance to get a look into the life of a quadruplet through this exclusive interview!
3. Did your parents dress you alike?
Matthew: Yes, usually Austin and I matched and Emma and Kaitlin matched all the time. Sometimes now my mom will buy us all matching shirts but we don’t wear them at the same time.
Kaitlin: Yes, boys matched and girls matched. Now that we are older my mom only buys us matching things once in a while.
Austin: When we were younger mom always wanted us to match.
Emma: Yes, my mom would always dress the girls alike and the boys alike. Sometimes, all four of us had matching outfits.

4. Do you have the same tastes? In music, food, TV shows?
Matthew: We all like pasta. We all have different tastes in music.I like country music, Austin likes blues, Kaitlin likes country/rap, and Emma likes oldies. We all watch similar tv shows except Austin. Austin likes anime and bio pics on old blues singers. Right now my favorite movies are the Rocky movies. I'm not sure what Emma and Kaitlin like.
Kaitlin: In music, no but in TV shows and food, we have similar interests. Sometimes we will binge watch shows together.
Austin: No, I love Classical, Folk and Blues while they like more modern music. We all love Italian food. I don’t usually watch TV Shows but I love older movies.
Emma: No, we all like our separate things. I don't listen to that much music, Kaitlin listens to rap, Matt listens to country, and Austin listens to old blues music. We all don't really watch TV but when we do we all want to watch different things. Sometimes we binge watch movies and shows together. We all pretty much like any food that's in front of us.
7. How many birthday cakes do you get?
Matthew: For the most part we all share one birthday cake. We all have to agree on one birthday cake flavor besides Austin he doesn’t like cake so he’s gets a pumpkin pie. When we were younger we each had our own cake. I had lightning McQueen, Emma had Tinker Bell, Kaitlin had Belle, and Austin had Optimus Prime. That was for our fifth birthday party.
Kaitlin: When we were younger we all had our own cake, but now we all share one cake.
Austin: Normally one but I don’t even eat cake so I’ll get a personal pumpkin pie.
Emma: We only get one birthday cake. We put all of our names on it and my family sings happy birthday to each of us individually.

8. Do you wish that you were just siblings, and not quadrupalets?
Matthew: No, because we would not have the same interest and experiences if we were different ages. We are closer because we are the same age and experience the same things on a daily basis.
Kaitlin: No, because it is unique to be a quadruplet, because there aren't  many known.
Austin: No because it’s unique to us.
Emma: No, I don't wish that we were all just siblings. I like being a quad, it makes us unique.

10. Which one of you is your parents' favorite?
Matthew: I don’t really think it’s a competition, I'm the obvious choice.
Kaitlin: My mom says we are all the favorites, one minute I am, the next Emma is.
Austin: Whichever one they're talking to at the moment. My mom will always say it to the kid there talking too.
Emma: I don´t think my Mom has a favorite. She says that I'm her favorite one minute and then the next minute she tells my sister that she's the favorite and so on.

11. When one person needs a new pair of shoes do the other three of you get new shoes too?
Matthew: When we were younger we all bought together. Now we don’t buy them together but only when each one of us needs a new pair of shoes.
Kaitlin: Usually we all need new shoes at different times, especially for sports, so it depends who needs them when.
Austin: When we were little we got them together but now we get new ones when needed.
Emma: No, we get new shoes as we need them. For school, my grandparents bring the girls to the mall to get the things they need, then another day they will bring the boys.

12. Have you thought about attending college together or apart?
Matthew: I would rather experience college separate from my siblings because I have been with them since birth. It would be a different experience.
Kaitlin: No, I am looking forward to going to school alone, I am curious to see what it will be like.
Emma: I haven't really thought about that yet. I wouldn't mind being together.
Austin: I have not even thought about it yet. It would be nice to have one of them there.

13. Did any of you ever impersonate one of your siblings?
Matthew: No, we look totally different.
Kaitlin: No.
Austin: No we’re too different
Emma: No, not really. We don’t look alike.
The following is an interview with the Wilke Quadrupalets' mother, Anne Wilke.
Star Status: Which child was born first?
Ms. Anne Wilke: Matthew was born first, then Emma, Kaitlin, and Austin. Matthew, Emma, and Kaitlin were actually born within a minute of each other, and the nurses yelled to the doctors to “slow down!”, so Austin was born two minutes later. They did give each baby their own minute on their birth certificates. They were born on November 3, 2006 at 3:41 p.m., 3:42 p.m., 3:43 p.m., and 3:44 p.m.

Star Status: Do you have any other children? Names? Ages?
AWilke: Yes, my oldest son, Nicholas, is 20 years old. He attends Lycoming College as a Criminal Justice major with a minor in Business. He is Lycoming’s soccer goalie and also enlisted in the US Army.

Star Status: How did you feel when you found out you were having quadruplets?
AWilke: Kaitlin was actually my “surprise”. I thought I was ONLY having triplets until two weeks before delivery. She was hiding behind Emma the entire time. I had a “triplet” baby shower and was prepared for three babies. When I found out I was actually having quadruplets, I thought “what’s one more at this point?” I was nervous but was determined to not deliver them too early, so they could have the best chance at healthy lives.

Star Status: What was the hardest part about having quadruplets?
AWilke: When they were younger, the hardest part was just the physical part of raising them. I was always outnumbered. Many nights of no sleep, feeding four babies at a time, baths times four, etc. The first year I was completely in survival mode. I don’t remember much! Now that they are older, it’s a different type of hard. It’s the physical part still by being their personal Uber driver to make sure each one is where they need to be (jobs, sports, activities), but also making sure I have one on one time with each and am present for them.

Star Status: Are any of the kids more artistic than the others? More logical?
AWilke: Austin is definitely the most logical. He is my concrete thinker. Sometimes, he can figure things out faster than most other people! Austin is also musically inclined. He is a clarinet player in the NHS Marching Band, and really enjoys older musicians, the 1920’s era. Matthew, Emma, and Kaitlin all enjoy playing and following sports.

Star Status: When one kid needs a new pair of shoes do the other three kids get new shoes too?
AWilke: We think it would be cool to share! More styles! When the quads were younger, we definitely went to the shoe store as a group! Shoes for everyone! We often tried to pick out different styles/colors so the shoes would be easy to pick out in a hurry. When they were younger, we utilized different colors for each quad to help with shoe style, cup color, etc. Matthew was red, Emma was purple, Katie was pink, and Austin was blue. As the kids have gotten older, we buy shoes on a need basis.

Star Status: How did you handle eating out in a restaurant? Was it complicated?
AWilke: When they were little, I would call the restaurant ahead of time to make sure they had four high chairs. That was most important! I got to know which restaurants could accommodate us. Fortunately, we have family close by, and they were always willing to come along to help. We would try to have one adult be the helper for one quadruplet during restaurant trips. We tried to do as many normal family activities as possible.