After Two Years of Masks: Opinions on the Mask Mandate

by Kathryn Dunn
On April 3, 2020 face masks became a requirement in the United States as the COVID-19 pandemic began to surge across the country. The Hamilton Township School District (HTSD) was closed down and virtual online learning was implemented for the remainder of the 2019-2020 school year. Later, on August 15, 2020, the Hamilton Township School District Board of Education voted to have hybrid classes for the 2020-2021 school year. Although the school year started with online remote classes, on October 12, 2020, hybrid classes were in session for Hamilton Township schools. The 2020-2021 school year was a time of uncertainty, and for a majority of the year, the hallways were bare and the classrooms devoid of students aside from icons on a screen.

Now, in the 2021-2022 school year, the hallways are finally filled yet again, and on March 7, 2022, the school mask mandate was lifted. Although the repeal of the mandate was meant to bring people closer to a sense of normalcy, instead, we are seeing division among the public in regards to lifting the mask mandate.
At Nottingham High School, students were asked two questions about their opinion on mask-wearing in school: "Do you still wear a mask in school?" and "Did NJ Governor Phil Murphy eliminate the mask-wearing mandate in NJ schools too late, just about right, or too soon?"

​Responses were in line with national and state opinions. Out of 206 students, 35.9% still wear their masks in school while 43.2% don’t wear a mask at all. Between these opposing poles are 20.9% of students who will sometimes wear their mask in school. Some students felt that it was too early to remove masks and others felt that the decision to remove the mask mandate was made too late. 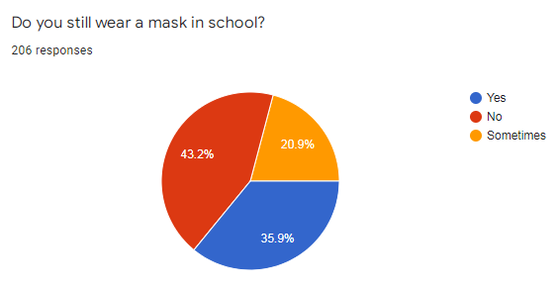 Survey: Living Without a Mask
43.2% of Nottingham students don’t wear their masks at school anymore. When asked to give further reasoning to their answer, there were a few categories which students fell into. Some students believe masks aren’t necessary because of the vaccine and “the virus is no longer lethal for people who have the vaccine.” One student told Star Status, “I believe in the guidance of our local, state, and federal health officials.” Another went as far as to say that “COVID-19 will soon remain as a simple flu in the world.” Other students simply found masks uncomfortable and missed the “free and normal” feeling of not wearing a mask. Some students reported that masks made them feel “nauseous since [their] face is in a confined space” or that they “can’t breathe properly.” Students also mentioned getting ‘maskne’ (mask-acne) due to wearing masks throughout the day.
Survey: Living With a Mask
35.9% of students polled said they still wear a mask around their school. The primary reason that people still wear their masks around school is because of safety and due to the long-lasting effects of the pandemic—physically, mentally, and socially. One student stated, “COVID is not over and people are still getting it. Many people I know have not gotten vaccinated and not wearing a mask will increase the chances of COVID being spread.” Many students who still wear their masks told Star Status that wearing a mask is not to protect themselves, but other people: “I wear a mask because I know people personally who, if they got sick, could be very awfully sick and I do not wish to unnecessarily bring disease to them. It’s as simple as wearing a piece of cloth on my face as if it were an earring and I value my friends safety above all else,” one student stated.
Survey: Living In-Between
From the statistics polled, 20.9% of students wear their masks in school sometimes, a majority of them wearing them in crowded halls and rooms, but taking them off in settings where they and others feel comfortable without masks. A student told Star Status, “I wear my mask in the hallways, but  I take it off in class because for the most part we’re socially distanced. I actually wear it in my last period, too, because my teacher in that class wears a mask and it seemed like the respectful thing to do.” Generally, students who said they wear their masks ‘sometimes’ in school wear them as a safety precaution in crowded spaces, assuming the stance that the pandemic is getting better, but safety should still be kept in mind.

Too Soon, Just Right, or Not Soon Enough?
The final question on the survey was, “In your opinion, did NJ Governor Phil Murphy eliminate the mask-wearing mandate in NJ schools too late, just about right, or too soon?” According to the survey results, 49.5% of students believe the mandate was lifted at an appropriate time while 33% believe it was too soon. The minority, 17.5% of students, believe the mandate was not lifted soon enough. Although there was no opinion section for this question, one student left a comment for Star Status. They stated, “ I think the timing was good because cases nationwide are at a record low, but I also feel like--at least in our school--the masks didn’t do much in the first place…people haven’t been properly wearing the masks anyways for months, so he probably could’ve gotten rid of them earlier.” The student mentioned how the majority of students did not wear their mask over their nose, making the mandate rather ineffective for Nottingham.
Masks in a School Setting: A Level of Trust
Among the responses from the survey there was a considerable amount of discussion regarding masks in an educational setting. There were quite a few comments about the trust within the school about cleanliness and safety. Although the mask mandate was lifted, many students are still concerned about learning in a safe school environment. As noted prior, many students wear their masks in the hall because of the crowded, unclean, and confined space. Some students who still wear their masks to school stated they have “no trust for…both students and teachers.” Another response said, “I don’t trust the kids in this school [with] being responsible.” There was also a comment which stated, “I don’t feel like we take enough precautions to have them off.” It appears that there is a lack of trust within the school due to the lack of precautions which was taken prior to and after the mask mandate was lifted.

Any student who came into school during the 2020-2021 school year knows that the hallways were divided, classroom seating was spread apart, and sanitation was one of the primary focuses of HTSD. However, after the hybrid schedule was eliminated, hallway precautions were ignored, seating was back to a state of normalcy, and overall precautions were abandoned. The primary group of students who feel a level of unease within the school feel this way due to a lack of responsibility taken by both students and staff. Due to the number of students and staff who did not wear their masks properly during the mandate, the allowance for crowded halls at the start of the school year, and the abandonment for precautions early on, some students believe there is a level of irresponsibility from the district from the start of the school year which has lead to distrust in the present.
Division Among the Nation
Ever since the COVID-19 pandemic began there had been arguments over mandates, the closing of businesses, and the future. The mask mandate quickly became a controversial topic, people turning to politics and—on both sides of the argument—resorting to hate. There were a few comments in Star Status’ poll which aligned with such beliefs. One comment stated,  “Cause since the jumó this corny masks ain’t do nothing but just make people delusional and scared of every little common cold there is.” Another student wrote that  “masks are cringe and Joe Biden is dumb and stupid (so is that Murphy guy).” One student who was pro-mask wrote that they wear a mask “Because it’s not like COVID went away, it’s still around. Letting people make the decision of not wearing a mask was the dumbest thing ever.”
It is unavoidable to have disagreement on a matter as controversial as the mask mandate and its repeal, but turning towards hate and arguments on both sides solves nothing. In a world plagued with war, poverty, and disease, the last thing people need is further disagreement and division, especially in an environment of growing minds. Rather than completely oppose opposition, perhaps acknowledge difference and welcome collaboration. A student who fell in the ‘sometimes’ category on the poll wrote an insightful comment in regards to such division. They wrote, “I don’t do it for myself. I feel completely safe personally because I’m fully vaccinated and boosted. I do it because I want to ensure the safety of my immunocompromised friends and family. Personally, I don’t judge people for wearing masks. I get it. Masks are annoying. But if wearing a thin piece of cloth over my mouth and nose can protect even one person, it’s worth it.” Although the student goes unnamed, we should all strive to be as accepting and dynamic as this well-spoken student.
The New World
Although students and staff discuss returning to a “normal” world, many students describe an entirely new age post-quarantine. Masks had been integrated in culture across the world prior to the pandemic in countries such as China and Japan. In America masks are becoming a normal occurrence for fashion and illness alike. Many students noted wearing masks simply because they “don’t want people to see what [they] look like” and being “part of [their] outfit now.” It is entirely possible that in this post-quarantine age masks are here to stay and precautions against illness will still be taken. In a community of mixed ideals and preferences people should be allowed to express themselves and take action in ways which protect themselves and others, especially after years of trauma and suffering. Remember that many families experienced great devastation over the course of the pandemic, and many are still suffering the consequences of loss. Be sympathetic to the preferences of others because whether we wear a mask or not, sometimes or always, we are all people, all survivors of a global tragedy.