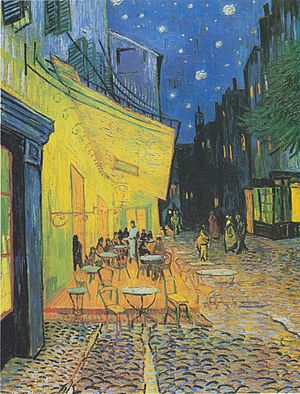 Cafe Terrace at Night is Vincent van Gogh’s first painting with a nocturnal background. Van Gogh captures a lively moment, taking place in a cafe front. A glowing warmth appears to radiate from its entrance and windows. Such a contrast between the starry sky and the cafe lights emphasize the comforting atmosphere emitted by the cafe. He  uses short strokes on the road, the little stones that come together to form a slightly bumpy surface.
It seems that van Gogh intentionally painted the cafe front  brighter, while the rest of the painting is under the effect of the night. An observer may say that the painting gives them an energetic burst. You might even imagine the bodies dodging the tables as orders are filled, all hurrying to satisfy the patrons.
Interestingly, this painting was made without the color black. It leaves me in wonder, how different could this creation by Van Gogh be if he had actually used black...
​ 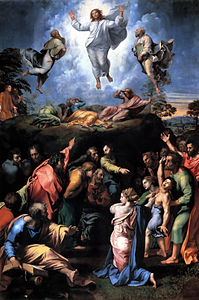 In Transfiguration,  Jesus is rising towards the darkened sky, his bodily halo illuminating the clouds around him to a pale ultramarine blue. Jesus is easily identified as the highest figure amongst the many other commoners. The commoners are stationed strategically around the painting. The people and Jesus create a triangular form, which can be compared to a social pyramid. Commoners decorate the bottom, the clergymen  are mingling on the higher ground, and lastly, Jesus is the star stationed in the limit, the sky.
Raphael’s use of dark patches in the painting emphasize the darkness of humanity without Jesus, but the patches are difficult to interpret what is going on in great detail. It is unclear to see what is going on in the “real” world, he perfectly models the blur of life.
The picture painted by Raphael plants many emotions into its viewers: surprise, awe, and curiosity. Perhaps, the viewer may even feel triumph, or the satisfaction followed after success. The position of Jesus forces the people in the picture and the viewer to look up, the faint glow of him represents the “light at the end of a tunnel.” Jesus is essentially the reward after a difficult trial, as portrayed by Raphael.